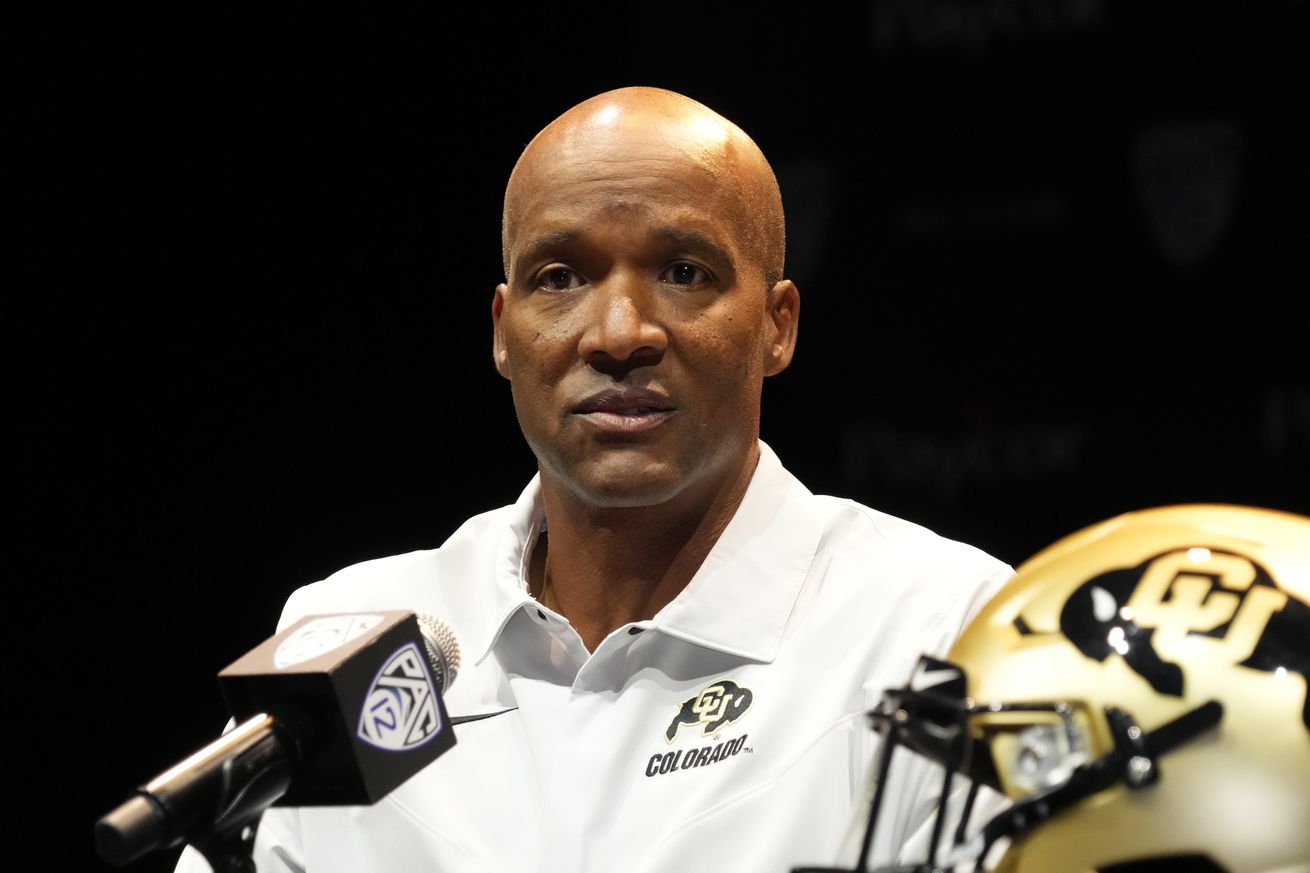 A new-look agenda for the Buffs going into next season

Karl Dorrell took the stage at Pac-12 Media Day on Friday with a renewed outlook going into year three as the head coach for the Colorado Buffaloes.

A lot of changes have come prior to the 2022 season, but none bigger than the ones on the offensive side of the ball. A new set of coaches including offensive coordinator Mike Sanford will take over for Darrin Chiaverini with an upgraded vision steered by Dorrell.

“We did change our offense completely from scratch. It’s a new system. We’re excited about that process of how the players have taken that information,” Dorrell said in his opening statement to the media. “(The players) have digested it and performed it, continue to do that during a time in the off-season, spring, now finishing up the summer. It was a really good summer for them to kind of continue to develop and mature in terms of being in that system.”

One of the players Dorrell made reference to early on in his comments was quarterback Brendon Lewis, who will compete with Tennessee transfer J.T. Shrout for starting reps going into the season. Lewis had his fair share of freshman “growing pains” after starting all 12 games last season and very little experience coming off a bowl game blowout in 2020.

“He can use that as a year of being the starter, gaining so much experience playing in the Pac-12, particularly some of the non-conference games we had,” Dorrell said.

“The first thing that came to me after the season is (Lewis) went back and watched all of the games just by himself and made notes and critiques about what he could have done better, what he did well, what he needs to improve on ... to develop into being a better quarterback than where he was last fall. There’s no question in my mind and in his mind he’s not even the same player.”

However, it’s not about Lewis or Shrout, but rather growth in the QB room itself. Dorrell said one of the biggest improvements was expanding the scholarship commitment from two to six among CU passers, creating more competition and a better environment of shared ideas. Just part of the overhaul done to the Buffs offense in an effort to breakaway from the previous scheme masterminded by Chiaverini.

As for Shrout, the future plans for him seem to be coming in steps while he recovers from a knee injury suffered last year. Dorrell admits the former Vols QB was held back during Spring Ball, but also says he has been active and is now ready.

“(Shrout) was somewhat healthy this spring, but we held him back. We didn’t want him to do any competitive scrimmage-like scenarios for him in the springtime. But he did the seven-on-sevens. He was still working on some conditioning and some movement drills. So I stand corrected, he might have been maybe 90, 95%. He’s completely 100% right now. He does everything that everybody does in terms of their summer training. So he’s ready to go.”

Dorrell did caution that Shrout’s biggest obstacle going into next year was himself.

“I would say with J.T., his challenge is J.T.,” Dorrell noted. “Just because he hasn’t played the game in a year. It’s him getting antsy, understanding the competition of it all, stuff like that. He just needs to come out here and perform and really do the things that are comfortable for him to do, kind of get back into the rhythm of being sore and being beat up, stuff like that, that he’s been missing for the last year and a half.”

Outside of the offense, Dorrell gave props to linebacker Quinn Perry for stepping up in Nate Landman’s absences. The preseason All-Pac-12 player is expected to fill the void left by Landman heading to the NFL. Dorrell believes Perry will be able to thrive at the position given the relationship between him and Landman.

“I think the best thing for Quinn — and this is something that’s a testament to Nate — Nate has taken Quinn under his arm last year when Nate got hurt, because Quinn had to finish the season at his position, and really help his progress as the season unfolded towards the end there,” Dorrell said.

“Hopefully he’ll carry some of that information that Nate was able to express with him and be coached and continue to physically develop and have a tremendous year this year. It’s good to get a little recognition early on for him from his efforts from a year ago. He’s doing everything that he should be doing for him to have a successful year.”

It was only natural being a UCLA alum for Dorrell to be asked about the school’s move to the Big Ten. He said he was initially shocked to hear the news, considering the storied history between UCLA and the Pac-12.

“I think it’s that time, things are evolving in college athletics,” Dorrell said. “Everything has susceptibility to change. There’s certain things that happen. This is a situation that has happened. But as humans, as we all evolve throughout the years, we’ll evolve and adapt and move forward. But it was shocking, I would say.”

Another evolution in college athletics are the changes with NIL. Conceptually, one of the best things to level the playing field and allow student-athletes to strike endorsement deals. But with the slight adjustments to the rules means finding different ways to recruit players to match their own personal branding while conforming with the one established by the university.

Dorrell stressed how CU can’t help players make deals, but can provide them everything they need to make informed decisions.

“It’s one of those things we do have, we call it influencer exchanges and programs that are within our department that are setting the table for NIL for our student-athletes. So we’re doing some very proactive work,” Dorrell said.

“Now, the challenging part of it is we can’t actually make deals for them. Can’t be the broker between this guy and this player. We can’t do those things. But we can give them all the information they need to put them in position to have that type of exchange, if that makes sense.”

Colorado opens the 2022 football season vs. TCU on Friday, Sept. 2 (TV: ESPN). It’s the first-ever meeting between the Buffs and Horned Frogs.