NBA (and other pro league) Buffs

Edit: I just googled Trentino and holy **** are there worse places to live.
Click to expand...

It's hard to give up on the NBA dream sometimes but George knows what it's like playing in the D league, travelling by bus, and living in some D league cities.

If I were a guy like him and had the chance to play in one of the better Euro leagues for good money it would be hard to turn down.

Club Member
Not exactly sure where this should go but have to think it could only help with LA recruiting.

Congrats to D White! I didn't remember he was on the World Cup qualifying team...who knows, if everyone keeps pulling out, maybe he gets invited to that too, although very unlikely.

read down a few for some Derrick White updates/vids

Alvin Wills established the Drew League in 1973 with 6 teams. Wills believed this league could be a place for young men and women of South Central Los Angeles to learn life lessons through basketball.

The Drew League’s goal was to help young people form meaningful relationships on the court that would spill over into the neighborhood, as well as build an institution that would bring top local high school, college, and pro players back to the community.

As a long time friend and mentor to Dino Smiley, in 1985 Wills decided it was time to let Smiley have a shot at directing the league. By 1985 the league had grown from the original 6 teams to 10 teams. Today the league matches up 28 “invitation-only” teams to battle it out on the hardwood.

Forty years ago, no one would have predicted that the gym at Charles Drew Junior High School on the corner of Compton and Firestone would play host to Southern California’s toughest competition, attracting streetball legends, collegiate athletes, and several NBA stars.

Our list of notable players and people could go on and on, but here are a few who have graced the Drew floor:

Not to mention the many well -known college, streetball, high school, and international pros that have played at the Drew.

The Drew has also been home to some special people like Eyleen Carlyle, the 1st female coach in the history of the league who went on to win coach of the year in the Drew Summer League.

The Drew has been a Mecca for west coast pro-am basketball for 40 years, and it is only getting stronger!
Click to expand...

Ski was also named 2019 Most Inspirational Player.
B 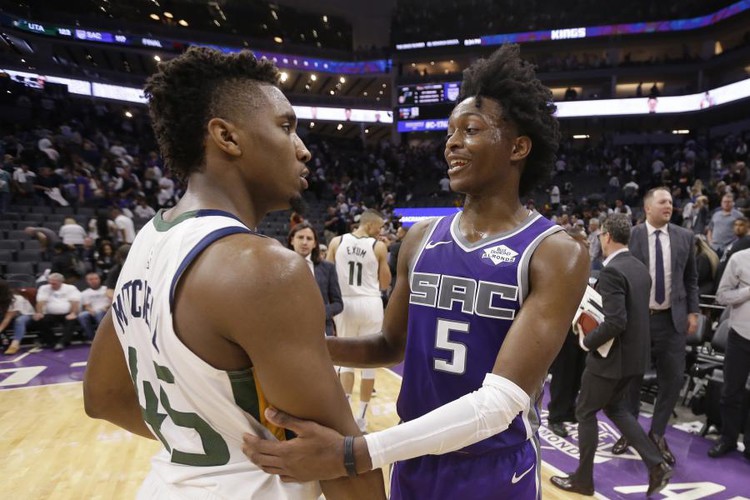 A re-draft of the hyped 2017 NBA draft class would look significantly different than the original order after two seasons...

MtnBuff said:
It's hard to give up on the NBA dream sometimes but George knows what it's like playing in the D league, travelling by bus, and living in some D league cities.

If I were a guy like him and had the chance to play in one of the better Euro leagues for good money it would be hard to turn down.
Click to expand...

Happy for him that he found a team (and playing and living in Europe aint thaaat bad), but he was the first Buff I really watched playing at CU so I was hoping he'd make it to the NBA... But maybe he'll get a spot on a summer league team and cracks a roster one day.
S

Derrick White had a solid 6 points and 3 assists game on 3-for-6 shooting against Czech Republic...

sticky said:
Happy for him that he found a team (and playing and living in Europe aint thaaat bad), but he was the first Buff I really watched playing at CU so I was hoping he'd make it to the NBA... But maybe he'll get a spot on a summer league team and cracks a roster one day.
Click to expand...

More frequently now than in the past players are coming back from Europe and sticking in the league.

Whatever is in George's future I wish him the best.
S

George's new team Dolomiti Trento finished 6th last season... so it's gonna be only Italian league and no european tourneys like EuroLeague or the less popular Eurocup for him next season... also, now chance to watch him against a German team for me

Sources: Spencer Dinwiddie to convert his NBA contract into a secured digital investment. Here’s what that means
(The Athletic) – Brooklyn Nets guard Spencer Dinwiddie is planning to turn his contract into a digital investment vehicle and receive an upfront lump payment, The Athletic has learned, an unprecedented move for an NBA player.
Dinwiddie, according to multiple sources, is starting his own company to securitize his NBA contract in the form of a digital token as he begins a three-year, $34.36 million extension with the Nets. It’s unclear how much of the contract amount he wants to raise upfront, but it would likely be less than the total amount, according to sources.
So how exactly would this work?
In a securitization, the borrower gives up some future income in return for a smaller lump sum payment. But the borrower, in this case Dinwiddie, then has more money to immediately invest than he otherwise would.
A token is a digital currency term. The bond exists in the digital currency world. Instead of buying the bond from a broker, it is through a token.
According to sources, this Dinwiddie bond would pay investors principal back and interest, which would be covered by what the Nets owe him.
Click to expand...

He should have just called JG Wentworth...

He should’ve just had them pay it in BTC.

Dinwiddie may be the new owner of a $3 million penthouse found at the highest floor in Brooklyn, according to a September report from the New York Post. The Brooklyn Point tower boasts the highest infinity pool in the Western Hemisphere, as well as a wine library and rock-climbing wall.
Click to expand...

Club Member
My thoughts on why Spencer is doing this is he wants to create a vehicle for all athletes to do an ISA (Income Share Agreement) for their contracts and is just using his contract as a proof of concept. If he can get a small cut of every athletes contract and then possibly gets these athletes to reinvest their immediate liquidation of their contracts into another investment vehicle where he also gets a cut, that would make Spencer a very wealthy man. all hail king Spencer.
B

Club Member
Hadn't heard this story but I gotta tell ya it was really weird to hear Spencer Dinwiddie being discussed on CNBC this morning!!

What the hell is a wine library? Don't you usually need to return items to the library?
B

There are few players in the league who do a better job of positioning themselves as a brand. The Mayor could not play another minute and would still be set up for success.

The N.B.A. issued the following statement to The New York Times on Friday: “According to recent reports, Spencer Dinwiddie intends to sell investors a ‘tokenized security’ that will be backed by his player contract. The described arrangement is prohibited by the C.B.A., which provides that ‘no player shall assign or otherwise transfer to any third party his right to receive compensation from the team under his uniform player contract.’”
Click to expand...